HomeNews & MediaNewsHonor, Courage, Commitment
Posted on May 21, 2019 By Bryan Lett

It was famously noted by former President Ronald Reagan that Marines don’t spend their lives wondering if they’ve made a difference. Nothing could be truer of the time DAV life member and Medal of Honor recipient Hershel “Woody” Williams spent in the Marine Corps, or of the decades that followed.

On Feb. 23, 1945, Williams and his fellow Marines were two days into their amphibious assault on the Japanese island of Iwo Jima and were experiencing some serious complications overtaking the airfield. Enemy soldiers were holed up in reinforced concrete bunkers, known as pillboxes, leaving the Americans as vulnerable as ducks in open water.

“Every time we advanced, they beat us back,” said Williams. “That’s when [my commanding officer] asked me if I could use a flamethrower to get rid of some of those pillboxes.”

Covered by only four riflemen, Williams daringly went forward alone in an attempt to eliminate the devastating Japanese machine-gun fire. For the next four hours, with a flamethrower tank strapped to his back, while under terrific small-arms fire, he crawled on his belly toward the pillboxes, wiping out one position after another.

“I was able to eliminate the enemy in seven bunkers, and that opened the path so we could break through,” said Williams. “Once we got behind them, we had the advantage.”

Unfortunately, Williams would not escape the brutality of Iwo Jima unscathed. He would be awarded the Purple Heart for shrapnel injuries sustained to his left leg, but he refused to leave his Marines behind as directed by the attending corpsman.

“The courage required to enter savage combat with a 70-pound backpack filled with flammables attached to you is hard to comprehend,” said National Commander and fellow Marine veteran Dennis Nixon. “That in and of itself is an act of profound bravery, but his disregard for his own safety to stay with his men and complete the objective is simply awe-inspiring.”

Williams stayed in the battle until the very end, and on March 26, 1945, victory was finally declared. He would go on to receive the Medal of Honor from President Harry Truman on Oct. 5, 1945. But while his story begins with heroics on Iwo Jima, his life of service after the military has continued to impact veterans and their families for the last half-century.

“After the war and during my time in the reserves, I was offered the opportunity to work for the VA,” Williams said. “I had never heard of the VA and didn’t even know such a place existed. But they told me I would be assisting veterans and their families, which struck a chord with me.”

Williams would go on to serve as a veterans counselor for 33 years—what he called “the best job anybody could ever have”—before his retirement in 1979.

It was while working for the VA that Williams was first introduced to DAV.

“Without veterans organizations existing in this country, we wouldn’t have near the benefits that we have now,” he said. “Congress just won’t do it unless we have organizations like DAV pushing for them to do these things.”

Williams is urging younger veterans from Iraq and Afghanistan to get involved and be part of the process that shapes veterans benefits and programs, even though he understands it may not be top of mind for those returning from war today.

“I was in that boat for a while, you know—getting married, new job, trying to raise a family, trying to buy a home and all of those other things that were occupying my time,” he said. “But eventually I realized if we don’t belong to these organizations, if they don’t have membership, they’re not going to be a factor … and they are not going to receive the same consideration for the benefits that veterans before them had.”

Now 95, Williams still shows no signs of slowing down in service to others. In 2010, he launched the Hershel “Woody” Williams Medal of Honor Foundation, dedicated to those families grieving the loss of a loved one in service by dedicating Gold Star Families Memorial Monuments in every state throughout the country and awarding scholarships to eligible Gold Star children.

“For DAV to have such a respected, revered and accomplished man among our ranks is a great source of pride for our members. It affirms the value of our mission and the caliber of people we serve,” said National Membership Director Doug Wells. “He sees the importance of being part of this and does a great job imparting that to others.” 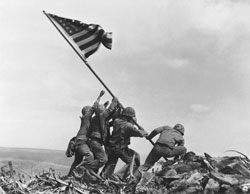 On the same day Williams earned his Medal of Honor, another event was taking place, which he saw from about 1,000 yards away: the iconic flag raising atop Mount Suribachi.

“I didn’t know anything about the flag raising until Marines around me began yelling and screaming while firing their weapons in the air and saying something about a flag,” Williams said. “Jokingly, I have told people that I think I had my head buried in the sand, but I turned around and the first thing I saw was the flag. I jumped up and started doing the same dumb thing they were doing. Morale was low at this point, and we had lost so many men. The flag gave us hope. It was kind of a celebration at that particular moment.”